Editor's note: This article was originally published in 2020.

'Tis the season for lounging on the coach with a mug of hot cocoa and a plate of cookies and watching Christmas movies. But have you ever wondered which holiday flick is most popular in your state? Sure, we love our Hallmark movie marathons, but we're talking about those classic Christmas films you watch again and again each holiday season.

Consumer site Comparitech compiled data from IMDB and Google Trends to find the most popular Christmas movie in every state. The results? More shocking than waking up in Whoville to find all the gifts gone. 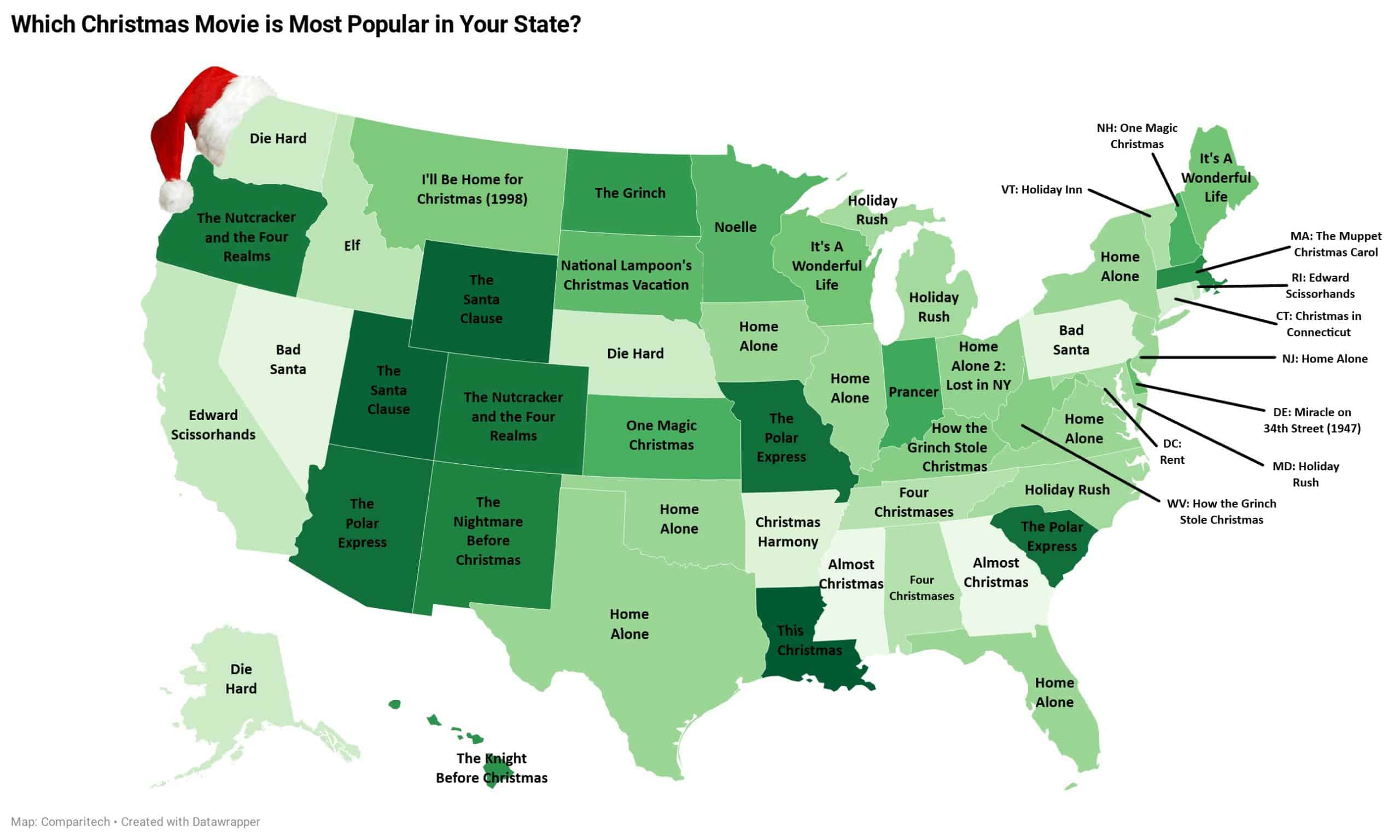 Home Alone took the top spot in a whopping 9 states, including Texas, Oklahoma and New York. I can't say I disagree with these folks. Watching little Kevin McCallister (Macaulay Culkin) defend his home from the Wet Bandits (Joe Pesci and Daniel Stern) is a holiday tradition in my home. I recommend you watch this one with a lovely cheese pizza (from Little Nero's, of course), just for you.

One unconventional holiday movie on the map is Die Hard, starring Bruce Willis as John McClane as an NYPD officer who has to save his wife and others taken hostage during a Christmas party. The action flick is the most popular Christmas movie in Alaska, Washington and Nebraska.

Perhaps even more surprising is the appearance of Edward Scissorhands, Tim Burton's fantasy romance starring Johnny Depp as a humanoid with scissors for hands. Is it a Christmas movie? California sure thinks so.

It's a Wonderful Life, the classic Frank Capra film starring Jimmy Stewart, is a favorite in Maine, while the Will Ferrell comedy Elf  is the top Christmas movie in Idaho.

The 2000 film How the Grinch Stole Christmas, starring Jim Carrey, took the top spot in West Virginia and Kentucky, while the 2018 animated flick The Grinch is the favorite in North Dakota.

If you love Bing Crosby holiday classics, Vermont agrees. The 1942 film Holiday Inn is the most popular holiday movie in The Green Mountain State.

However, two much newer movies also appeared on the list. The 2019 movie Noelle is the top movie in Minnesota, while Hawaii favors the Netflix movie The Knight Before Christmas.

My question is: where is the holiday rom-com representation? Is no one rewatching The Holiday, Nancy Meyers' iconic holiday house-swap movie starring Cameron Diaz and Kate Winslet, over and over until New Years Day like me? Or The Family Stone, my personal favorite (with respect to National Lampoon's Christmas Vacation) chaotic dysfunctional family Christmas movie?

Whether you prefer to see Bruce Willis or Clarence the guardian angel save Christmas, there's plenty of inspiration here for a holiday binge watch.